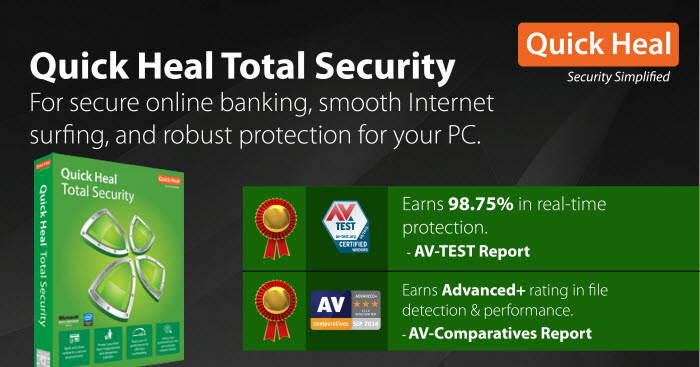 Highlights of the report:-

Pune, February 26, 2018: Quick Heal Technologies Limited, one of the leading providers of IT security solutions, today released its Annual Threat Report – 2018 with the objective of providing qualitative insights into the cyber threat landscape that impacted individuals and businesses in 2017. The report features data analyzed by Quick Heal Security Labs from millions of products to deliver timely and advanced protection to individual and enterprise customers under the brands ‘Quick Heal’ and ‘Seqrite’ respectively.

In 2017, Quick Heal Security Labs detected over 930 million Windows malware that targeted individuals and businesses. Ransomware, cryptocurrency mining and zero-day exploits headlined the threat landscape in 2017 with ransomware growing 300% in comparison with 2016. 2017 was dominated by several exploits leaked by Shadow Brokers such as EternalBlue, EternalChampion, EternalRomance and EternalScholar which were responsible for advanced ransomware campaigns such as WannaCry and Notpetya, and a few cryptocurrency mining campaigns. With the growing availability of exploit kits and ransomware-as-a-service, Quick Heal Security Labs predicts ransomware to become more vicious in 2018.

With the sudden rise in Bitcoin’s valuation, cryptocurrency miner malware became a hot attack vector for cybercriminals.  In 2017, Quick Heal Security Labs detected over 14 million hits of cryptocurrency miners with PE executable miners and script miners contributing 3 million and 10 million hits respectively. Quick Heal Security Labs predicts cryptojacking to explode in 2018 as it empowers attackers to use the latest techniques and discreetly use endpoints to illegally mine cryptocurrency.

Sharing his insights into the threat landscape in 2017, Sanjay Katkar, Joint Managing Director and Chief Technology Officer, Quick Heal Technologies Limited said, “The rising usage of advanced techniques by cybercriminals to propagate into endpoints indicates that the threat landscape will continue to evolve and become more sophisticated with each passing year. While technology makes our lives easier, our rising dependency on connectivity of everything makes us vulnerable to all forms of cyberattacks. With the stakes so high, it has become more important than ever for individuals and businesses to adopt a more proactive approach towards safeguarding their digital assets.”